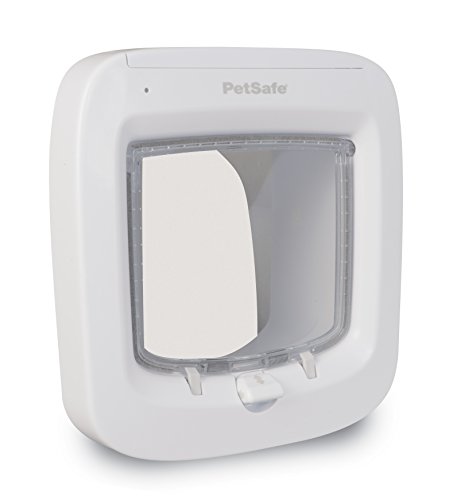 A good basic microchip catflap, with both mains and battery power options.

However it only has one scanner which makes it vulnerable to determined intruders, which means it falls just short of the best microchip cat flaps

The PetSafe Pet Porte Smart Flap is one of the latest generations of smart catflaps, but how does it measure up to the best microchip catflaps?

Well one of the big problems with a standard cat flap is with other cats coming into your house. Obviously, that’s not something that you want. A microchip catflap gets around this by reading the chip on any cat trying to get in and only letting those with a microchip it recognizes through.

The overall specification is good – this model can be programmed for up to 40 different cats and it can be programmed easily. Just put your cat’s head in the back and then you press the button inside and it registers the microchip with your cat.

There are a few manual override settings so that you can set it to only allow cats in, only allow them out or lock it totally. This is great if your cat has recently had vet treatment and you know you want to control whether your cat can go in or out. This is done by rotating the switch on the front

Installation is no harder than a standard catflap. You get a cutting guide template that shows you exactly where to cut out. You can either do this yourself or get a handyman or glazier to do this (depending on whether it is a wood or glass door) You can then slide your catflap into place and secure it with two screws that bolt in and that that’s pretty much it really!

Another advantage of this type of catflap is that they lock, forming a draft-proof seal, as drafts can be a major issue with standard catflaps.

Which cat microchips are compatible with the PetPorte cat flap?

The Pet Porte microchip cat flap unlocks for your cats only by sensing their pre-existing microchip implant that the vet put implanted under the skin of their neck in order to check their identity.

It doesn’t open for any other cat – even other cats that are microchipped!

Which Microchips does the PetPorte Work With?

The Pet Porte Smart Flap is optimised to work with the Bayer Tracer Advance (for the best read range) or Identichip (very good read range) chips, which it can sense from up to eight inches distance and in as little as 1/20th of a second!

However, the Pet Porte cat flap “talks to” all European 15 digit ISO pet microchips including:

It does not work with:

** We do not recommend AVID as some customers have reported read range difficulties with those chips. If your cat has a pre-existing AVID chip then you could take advantage of a risk-free trial to find out if the cat flap will read your cat’s microchip or not.

What are the options for AC power and battery power?

It does require 4 AA batteries to run it, although some models do come with the option of using mains power (although we would suggest you still keep some batteries in there in case of a power cut locking your moggy out!) it comes with a three year warranty, so you know you are backed up if anything goes wrong, and it is large enough to take anything up to an 8 KG cat, which will cover the vast majority of domestic cats

The Pet Porte Smart Flap has a hybrid power system enabling you to run it on batteries, AC adaptor (supplied) or both AC adaptor with battery backup.

Running the cat flap on battery

It will run on 4 AA batteries for at least six months of average use by 2 cats. There is a choice of either having the cat flap open or lock if the batteries run out and there is also a low-battery warning indicator.

You can also use the supplied 12-volt adapter that simply plugs in a nearby socket to power the cat flap continuously. When you have the AC adaptor plugged in the Pet Porte goes into the Optimised mode and scans continuously so that your cat could run inside quickly if he or she needs to.

Special note about the wiring

We recommend using the supplied AC adaptor that comes with a 2.25m cable together with a 9-volt battery as backup if possible. We do stock a special 5-meter low voltage extension cable if you require extra cable length. This simply plugs into the end of the AC adaptor cable so you can neatly tack it around skirting boards etc.

What are the size and dimensions of the Pet Porte Smart Flap?

Pet Porte Smart Flap has a 16cm x 16cm door making it a great size for most cats of up to 7kg in weight to easily get through. This includes big domestic cats including the Norwegian Forest Cat and Maine Coons.

The outer plastic case of the cat flap measures 23cm wide by 23cm high and is approx 4.3cm deep. It comes in two parts that bolt together – an inside part with the controls and the flap itself, and an outside part with a porch that houses the scanner. These are connected together by a wire.

Dimensions of the external sensor porch

The porch that contains the scanner coil which reads your cat’s microchip is 19.5cm wide by 14.2cm long and 3.7cm deep. That’s about the same size of a CD case. The reason it protrudes is so that it is positioned over your cat’s microchip when your cat wants to open the door.

How to install the Pet Porte Catflap

For the specifics of the PetSafe, read on…

What size hole to cut

The size of the hole you need to make for fitting can be either a 212mm diameter circular hole or a rectangular hole of between 163mm by 163mm. It will also fit existing cat flap holes below 220mm x 220mm. The cat flap clamps together by use of the two bolts (supplied).

Minimum and maximum thicknesses of installation

The minimum thickness for your door or window is only a few millimeters so the cat flap can be fitted in a single pane of glass right up to a 4cm thick door.

If you are installing the Pet Porte Smart Flap in a wall, the maximum width of your wall can be approx 38cm or 15 inches. This is due to the length of the wire that goes from the inside part with the buttons on it to the outside part that houses the microchip scanning coil.

How many wall tunnel pieces to order

Wall tunnel pieces are each 4cm deep, and you get one 4cm piece included as standard. The wall tunnel segments are optional but do give a very neat professional look to the installation so are recommended.

Calculate the number of wall tunnels by the depth of your wall in centimeters, minus 4 centimeters for the wall tunnel that is included, divided by four centimeters. If you have a remainder (eg. 6.4) you would need to order one extra segment which you can cut down.

The Pet Porte also has some other cool features

In “night mode” the flap will detect the light levels dropping and then stop your cat from going out. As light returns, it will unlock in the morning but your cats will always be able to get inside.

Of course if you are happy for your cats to come and go as they please day and night you can leave the cat flap in normal mode.

Can I switch the “beep on entry” off?

By default the Pet Porte will alert you of their movements by making a soft “beep” when a cat enters or leaves.

If your cat is particularly timid you can easily switch the beep on entry off. Whilst some customers like to have the bleep switched on so it’s possible to know when your cats have come inside other customers want the cat flap to operate nearly silently. With the beep switched off all your cat will hear is a very soft “beep” that is not at all scary. Any sound that is produced comes from the solenoids that unlock the cat flap. The Pet Porte Smart Flap is probably the quietest cat flap on the market and certainly quieter than the copycat SureFlap microchip cat flap sold elsewhere.

How do I set the door opening time?

It is possible to adjust the length of time that the door unlocks after scanning your cat’s microchip. This is useful if your cat comes through the microchip cat flap slowly or if you would like to prevent other cats from tailgating your cat.

The Pet Porte is well-priced, well built and backed by a 3 year warranty. Added to this is the ability for it to remember up to 40 microchips and the ability to power it with battery or mains is a plus for many people.

Where it lacks is only having a single scan and lock, which means that potential intruders can pull it up to get out (or cats looking to escape) even when you don’t want them to.

Certainly worth consideration as a basic Microchip cat flap, but not quite enough to dislodge our current pick, the Sureflap Dualscan

See also  What Is The Best Microchip Cat Flap? See Our Top UK Picks for 2021