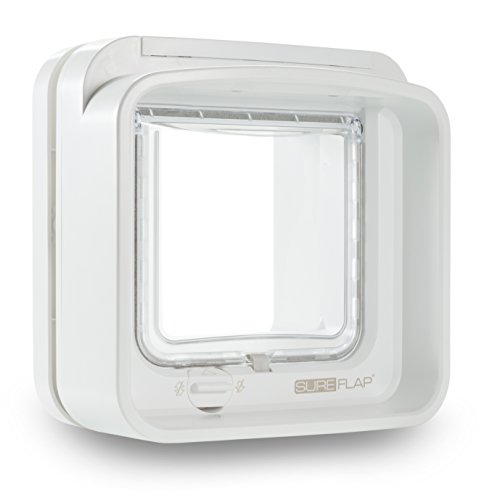 More secure and more functions than the basic SureFlap microchip catflap for not much more money makes this our overall winner, even if you only have one cat

Sureflap make a range of catflaps, both microchip, and standard, all of which are pretty easy to fit, well made and pretty well priced. So why have we picked this one as our overall winner?

It has two main advantages over the majority of the competition – security and the ability to give different pets different permissions – while not being anywhere near as expensive as the Connect, offering the best mix of features to price.

The weakness of the original flap was that, while intruders could not push their way through, smart animals like squirrels or raccoons could their claws behind the panel, and pull it towards them and get in!

So, they added a second scanner and lock, which meant that whether it was pushed or pulled, it was not going anywhere!

You won’t have to worry about the rough alley cat breaking into your place and bullying your poor cat. The video below shows some Racoons unable to break in, so you can be sure that a few cats or squirrels really won’t cause much alarm.

In addition, this second scanner can be programmed independently, which is another big advantage. The reason is that vets generally encourage people to own more than one cat. Sharon Crowell-Davis, a professor at the University of Georgia College of Veterinary Medicine explains “Living with other cats is stimulating and overall a very good thing.”

The problem is that at some point you will need to restrict one of your cats from going outside if they are recuperating or on certain medications. The only solution used to be to stop any of your cats from venturing outside, however, this catflap lets you not only program which cats can get in, but which can get out too. This is what the Dualscan part of the name means.

It can do this for up to 32 cats…which should be enough for most homes!!

Like all of the SureFlap range it will work with 9, 10 & 15 digit microchips as well as RFID collars if your cat is not microchipped.

Naturally, if your cat manages to escape, they can still get back in, but if you tell this catflap not to let them out, it will simply not open.

Since this additional functionality is is only a few pounds more expensive than the standard Sureflap catflap, we think it is the best balance of performance and price.

In this section, we will look at setting up, programming and using the Suresafe Dualscan cat flap

It runs on 4 x AA batteries. They are not included with your cat flap. Use new, non-rechargeable batteries for best results.

If you use high-quality batteries, it will last about a year for two cats that use the flap moderately, although I tend to change mine more frequently to be safe…you really don’t want to shut your cat out on a cold winter’s night because the batteries died!

Programming your cat into the cat flap

The DualScan fits in the same size hole as the others in the range, so it can be fitted easily if you previously had a SureFlap.

If not, the fitting one in a standard door is pretty straightforward for anyone with basic DIY skills and tools. To fit it in a glass door will generally require the services of a glazier or a builder to install one in an external wall. If you have a wooden door and do not want your cat flap to stand out too much, it is also available in brown.

OK that is essentially all you need to know, but read on for more detailed information on how it all works…

The Sureflap Dualscan Microchip Cat Flap works by leveraging passive RFID technology. This means that the microchip must be scanned to obtain data from it. It won’t transmit the data itself. The scanner is the active component that scans data from the microchip and uses it to activate the lock mechanism.

There are two antennas in the Sureflap Dualscan Microchip Cat Flap. They are located on both ends of the cat flap to facilitate easy entry and exit of pets.

When the antenna scans the microchip, the flap may unlock, depending on your permission. After it is unlocked, the cat must pass through it just like conventional flaps. After your cat passes through the device, the door will shut automatically.

You can rely on the Sureflap Dualscan Microchip Cat Flap to scan the microchip of your cat, whether it is outside or indoors. Your cat must put its head close to the door for it to scan the microchip. Microchips are often inserted at the back of the neck. Pet owners should check the position of the microchip. Sometimes, it can sink deep into the skin with time. This can prevent the chip from being scanned.

If your cat’s microchip does not work the Sureflap Dualscan Microchip Cat Flap can work equally well with RFID tags so you can also attach an RFID tag to your cat’s collar.

These tags can be purchased from the company website or Amazon.

With the four-way manual lock, you can create different combinations for your pet’s entry and exit.

The Sureflap Dualscan Microchip Cat Flap is compatible with 9, 10 and 15-digit microchips. The system can store 32 different microchip numbers. It preserves these numbers even when the batteries have been removed.

The frame is lined with brushes for proper sealing. This keeps out draughts and prevents the door from banging loudly. Quiet operation is a major plus point for this cat flap.

The Sureflap Dualscan Microchip Cat Flap is powered by 4 AA batteries. Depending on usage and brand, the batteries can last from 6 to 12 months.

Other cheap models lack the low battery indicator, which has several drawbacks. If the batteries expire while you are away, your cat may not be able to enter the house. It will remain trapped out of the house until you return.

You can apply the Only-In setting for indoor cats. As the name implies, this setting allows your cat to come inside while preventing it from leaving once it is in. To allow your pet to leave, turn the dial manually. This setting is great for keeping your cats indoors during the night.

The Only-Out setting lets your cat leave. But it cannot enter once outside. This setting can be useful in situations where you want to keep your cats outside. For example, when you have a guest over who is allergic to cats or you want to do something without getting disturbed by your pet.

The Locked mode keeps the cat flap locked at all times. Cats can neither enter nor leave your place.

The Sureflap Dualscan Microchip Cat Flap is largely maintenance-free. Aside from wiping the plastic surface to remove grime (especially from the lens of the detector) and replacing the batteries, the only other job is the occasional de-furring

Since cats are furry things, when they climb in and out, some of their fur will get captured by the draft excluder in the Dualscan. This can build up and cause erratic behaviour and wear through batteries faster.

SureSafe have designed a way to address this without needing to remove the flap from the wall or door.

You simply deactivate the flap using the button in the battery compartment, then lift the flap and remove the fur, then just reactivate

The Sureflap Dualscan Microchip Cat Flap should not be too difficult to install if you have experience with hardware, although I would seek professional help if you aren’t much of a DIYer (but then I would say that, wouldn’t I!)

This cat flap can be installed on brick walls, doors, glass windows and PVC. Several accessories are available for satisfactory installation, which can be purchased separately.

The video below gives an overview of how to do it, but I have written a more in-depth cat flap installation guide here

On the other hand, a major drawback of the Sureflap Dualscan Microchip Cat Flap is that skittish cats may not be able to use it as they are afraid of the clicking sound of the door.

Unfortunately, this sound is produced by all electronic doors, so these cats will have problems with other electronic cat flaps as well!

The Sureflap Dualscan Microchip Cat Flap is a great balance of features against price.

Sureflap Dualscan Microchip Cat Flap is easy to program, letting you establish rules dependent on which cat, the time of day and other circumstances

While ideal for households with multiple cats, the unit is also much better at keeping out unwanted animals and your own in if they are a the reincarnation of Houdini!

On top of this it is low maintenance, tough and comes with a 3 year warranty and is our pick of the current crop of microchip cat flaps

See also  How Strong And Secure Are Microchip Cat Flaps?